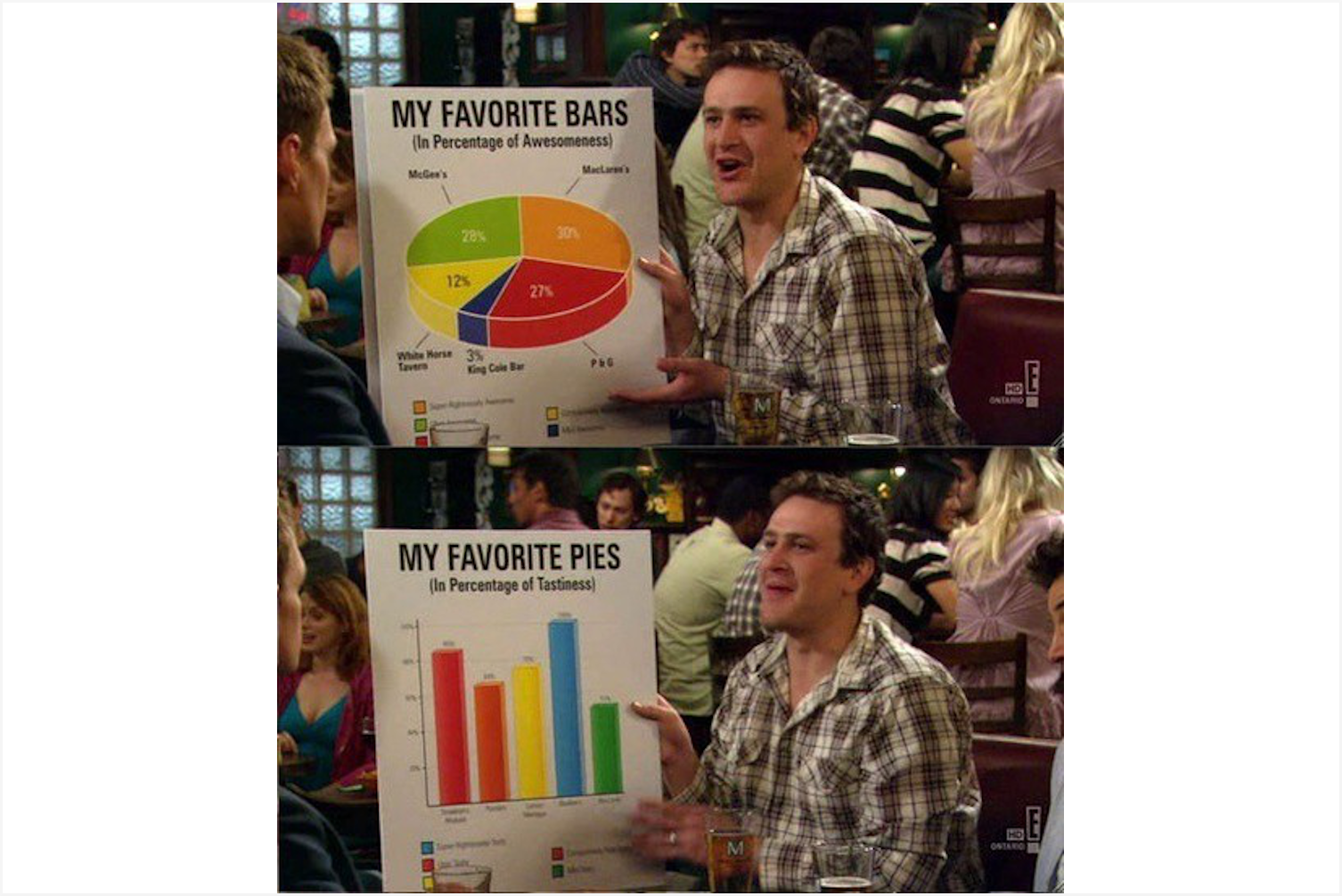 Pie charts remain useful, but only because they're familiar.

“There is no data that can be displayed in a pie chart, that cannot be displayed BETTER in some other type of chart.”  — John Tukey

“A table is nearly always better than a dumb pie chart... pie charts should never be used.”  — Edward Tufte from The Visual Display of Quantitative Information‍

Such is the scorn that many hold for our old friend the pie chart. From a data visualization perspective, it’s hard to justify using a pie chart rather than a horizontal bar chart, or even a simple table. Yet, pie charts still appear in many corporate reports. Why?

I revisited pie charts recently after seeing two of them side-by-side in an economics report. The report looked pretty good aesthetically, but the pie charts made my presentation senses tingle. I generally struggle to interpret pie charts, and pretty much any data presentation expert will tell you to avoid them. My curiosity got the best of me and I decided to wade in.

This whole exercise started while working with my colleague Rob Gair. Rob had noticed an economics report from a third party system that was static. It was a classic case of I Keep Clicking on the Report and Nothing Happens. All of the charts and tables in this particular report were rendered statically: no links to source data, no ability to change formatting, and no opportunity to interact with the data.

Mission 1 accomplished: audiences benefit greatly from interactive reports, and it’s easy to do in PDQdecide.

This is when I started feeling uneasy about the pie charts. It wasn’t just the presence of pie charts (which many deem an automatic foul). Something about the chart rendering felt wrong.

Then I remembered this famous example of chart junk from Steve Jobs and his Reality Distortion Field:

In the above example, two distortions unfairly distort the data in Apple’s favor:

It might be a coincidence, but likely not when at MacWorld 2008 nearly every Jobs visual distorted the data in favor of Apple. You can make your own judgements on where this particular example lands on the spectrum between showmanship and manipulation, but bear in mind that it does fit into a broader pattern of sketchy behavior by Steve Jobs.

Back to the economics pie chart that Rob and I noticed, the visual distortions are even greater than the MacWorld 2008 example:

You will find many people on the Internet chanting ‘death to pie charts’, but I’m not so harsh. With our product PDQdecide, we work hard to design good default reports, but we also give users the freedom to edit formats and choose whatever data representation they prefer. PDQdecide lets you do whatever you want. Don’t like pie charts? Use something else. Like them? Make more!

...the best practice for pie charts is to turn them into tables or horizontal bar charts.

Generally speaking, the best practice for pie charts is to turn them into tables or horizontal bar charts. Demetris Christodoulou has some good suggestions on transforming pie charts into better data presentation formats, especially when making comparisons between two data sets. For example, here is one quickly reworked version of the economics report that started this whole thread:

So what to do about pie charts? If you’re a pie chart creator or consumer and you haven’t already, I recommend digging in and learning more:

Personally, I almost never author pie charts, but I’m not militant about the topic. Pie charts are not universally bad like many claim, and they can still be valuable if used judiciously. If nothing else, pie charts are useful because they are familiar. Sometimes familiar beats better in the real world. That said, I will take one hard position: 3D pie charts rendered at an oblique angle are always a bad idea.